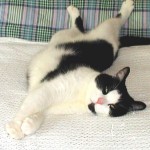 Many of you followed my journey the past week as I handled the sudden decline and passing of my dear 14-year-old Oscar. When he passed away this past Saturday afternoon, a little hole the size of a cat paw print was drilled into my heart. I’m now in the grieving process and have been working with crystals to help me (and my kitties Lucy and Jacob) process the grief and learn how to live life without Oscar (who was larger than life).

I have previously written about the grieving process when I lost my Sammy 10 months ago and all of the wonderful things that pets teach us. I adopted Oscar when he was only 4 months old. He came from a struggling shelter in mid-Michigan (where I eventually volunteered and ended the practice of pound seizure). The next day, he was diagnosed with distemper (panleukopenia) which is almost always fatal; yet he purred his little body back to health. This is how he earned the nickname Boo Boo (because he had so many tubes coming out of him while he recovered that he was filled with boo boo’s). After he recovered, I adopted Lucy to be a playmate for him. Then a year later, I adopted Sammy for him so that he would have a boy to romp with. So I’ve always said that I adopted one cat and he adopted two of his own. 🙂 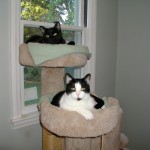 For 14 years, and he’s been through so many life changes with me. He’s been my rock, my joy and was the glue that kept us all together. Oscar loved Lucy; Oscar loved Sammy; and after Sammy passed and Jacob joined us as a foster cat, Oscar then loved Jacob and adopted him, too! I’ve never met another cat like Oscar … he was a perpetual kitten, even at the age of 14, with a heart full of love. 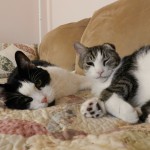 Oscar and Jacob (who joined us after Sammy passed)

What I wanted to share today are some interesting connections that I have become aware of with the passing of Oscar. I know enough about numerology to know that this means something; I just don’t know what it means. So if you’re a numerology expert, please post a comment to share your thoughts.

This is what I know: 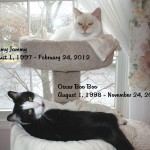 An animal communicator told me over a year ago (as both Sammy and Oscar were starting to decline from health issues) that they would pass within a short time period of each other because they were so bonded. What I do believe is that Oscar and Sammy (in spirit) were connected because the timing of Oscar’s passing is confusing. Oscar had been thriving and doing well (even with his health issues) up until a week before his passing. He then suddenly had a glucose crash and was not able to fully recover. It came out of nowhere and even the veterinarians could not explain it (since his health issues have caused high glucose levels for 18 months, not crashing to low levels). So I do believe that my two boys were working together to help Oscar pass on a specific day and time. Now their ashes are together in an urn that has this photo (above) on it.

What it all means …. I haven’t a clue. If you have insights, please share! In the meantime, we will continue to miss Oscar’s presence, him running around the house with a toy in his mouth while meowing, and being a perpetual kitten even up to a week before his passing. He was my joy. So enjoy this video of Oscar and Sammy showing how adorable they were. 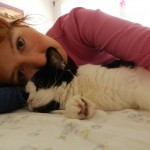 Allie and Oscar (a day before his passing)