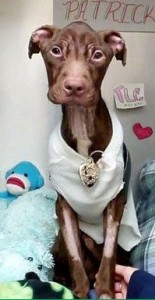 We continue to see the passage of laws to protect animals from humans harming them, and many of those legislative bills are named after an animal who has been victimized. There is Daniel’s Bill in Pennsylvania to end gas chamber killings and named after a dog who survived an attempt to end his life in a gas chamber; the federal Pet Safety and Protection Act bill is named after Buck, a dog who survived the inhumane conditions at a now-closed Class B dealer facility in Arkansas; and then there is Patrick, one of the most prominent figures on social media sites in the campaign to end abuse of animals who, himself, survived near-death due to starvation and being tossed away in a garbage dumpster. In 2009-10, I drafted a bill to end pound seizure in Michigan and named the bill after Koda, a dog who was surrendered to an animal shelter and later sold to a Class B dealer for research. Although that bill ran out of time, it is in process of being refiled and named after another dog who was cruelly treated in a research facility.

For those of who love, appreciate and respect animals (and frankly, any human being should at lease respect animals and their place in our world), putting a face and a name on a legislative bill helps to garner more attention, support and gives the issue life through the complicated, and often dead-locked, legislative process. These literal animal advocates unknowingly lend their name and tragedy to help raise awareness amongst the human race as to the atrocities that humans can inflict upon our animal companions. Some animal advocates travel to legislative sessions, advocacy rallies, and even to other states to help spread the message and plead with their soulful eyes for change. Daniel the Beagle, as he is known to his friends and family, has his own website, is making appearances on TV (including woofing it up with Anderson Cooper) and has dedicated his new leash on life to helping more animals find the lucky breaks that they deserve.

There are numerous legislative bills (and many laws) named after animals, so please share those that you know of, whether successful or not, and let’s give recognition to these animal advocates for raising awareness in a world that seems to have forgotten the adage … Do unto others as you would have them do to you.

To learn more about the 2012 legislative season and what you can do to help pass animal protection laws, check out my interview on All Paws Pet Talk Radio on January 23rd or pick up a copy of Defending the Defenseless:  A Guide to Protecting and Advocating for Pets.