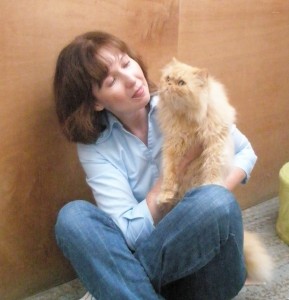 Allie with Crookshanks from the Harry Potter movies. © 2009 Allie Phillips

Those that know me, know that I’m a Harry Potter fan …. well, more like a fanatic! So it is only fitting that I blog about pets in movies in celebration of today’s movie release of Harry Potter and The Deathly Hallows. The Harry Potter films have featured a variety of different animal species and included their stories alongside the key characters. So who makes sure that these animal actors are protected and cared for while filming? It would be American Humane Association’s Film & Television Unit in Los Angeles which has the exclusive on-set jurisdiction from the Screen Actor’s Guild to oversee the safety of animals in film. They are the No Animals Were Harmed® folks.

Last summer, I had the honor and experience of a lifetime to visit the film set of Harry Potter outside of London. I tagged along with my friends and co-workers from American Humane where they have had a safety representative on-site with the Harry Potter movies for over a decade. While some people and organizations protest the inclusion of animals in movie and television, people and movies are enriched by including animals. After all, animals are in our lives and in our homes; so why not have them safely starring along side people in movies?

I saw first hand the well-treatment of these animal movie stars and the lengths that American Humane’s safety representatives go to insure that every animal, whether an elephant or an ant, go home safely at the end of the day. And while I was star-struck seeing the stars of the Harry Potter films (and yes, the actors playing the Weasley twins are really that funny in real life), spending time with the animals like Crookshanks, Fang, Hedwig, Mrs. Norris and the cat that plays Professor McGonagall’s animagus, was a dream come true.

So while I (along with millions of other muggles) celebrate the release of Harry Potter and The Deathly Hallows (and myself seeing it three times today!), we can all rest assured that whenever American Humane’s Film & Television Unit is on set, the animals are in good hands. After all, who doesn’t love a movie with animals? To learn which films have received the No Animals Were Harmed end-credit for the proper treatment of animals, check out American Humane’s website.