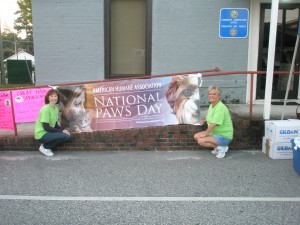 As Founder of the Pets and Women’s Shelters Program, I wanted to create an annual event to help the PAWS shelters raise money to sustain their program, while raising awareness regarding pets caught in the cross-fire of domestic violence. So I created National PAWS Day and the first annual event was held yesterday. Seventeen PAWS shelters, from Alaska to Alabama, participated in the event by hosting a dog walk. I attended the event hosted by Families First in Whiteville, NC and was overwhelmed by the community support. One woman who attended the event shared that she had been in an abusive relationship, her daughter was currently in one, and attending the event was her first step toward taking back her life. I was humbled to see so many people (and animals) benefitting from the PAWS Program. Stay tuned as more exciting things are on the horizon to raise awareness regarding this issue.